Michael Kirsch from Larouche PAC joins me to discuss the North American Power and Water Alliance NAWAPA XXI. You can find much more information about it on here: www.larouchepac.com

i) A water and power proposal employing a vast number of industries involved in material and machine production which are vital for the United States to develop and salvage, as well as new infrastructure routes stretching most of the continent, providing millions of Americans and Canadians long term employment, and training a new generation of highly skilled workforce; its construction will provide the basis to industrialize northern Canada and Alaska for the first time, while reviving the once proud rust belt state economies of the U.S.

ii) The utilization of 11% of the runoff of Alaska, Yukon, and British Columbia, as a permanent source of water to double food production in the U.S. Southwest and Northern Mexico, turn would-be flood waters in one area into the means of fighting drought in another, bring water to the dry Canadian Prairie provinces, create an industrial resource canal throughout the heartland of Canada, and halt the water wars between the western states.

iii) This project would massively increase the economic activity of the U.S., Canada, and Mexico for a generation. Mexico has already initiated water projects that would connect with NAWAPA XXI, while previous generations of political leaders in Canada have endorsed the proposal. NAWAPA XXI would provide a model for co-operation between sovereign nation states that would benefit all parties involved… 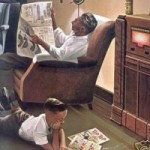 Out and about in your green ghetto- America 2...

What is Community Oriented Policing? Whose sp...
Bookmark the permalink.