Solzhenitsyn’s Warning to the “Free” World

Solzhenitsyn’s Warning to the “Free” World

“Few have explained this Communist-Capitalist partnership better — or exposed Soviet terrors more effectively — than Alexandr Solzhenitsyn. After criticizing Stalin in a letter to a friend, he was imprisoned for spreading “anti-Soviet propaganda” and served eight years in torturous Soviet labor camps (1945-1953). When he seemed to be dying of stomach cancer, a faithful doctor shared his testimony and apparently led Solzhenitsyn to put His faith in God. Exiled to Kazakhstan, he was restored to health. In his 1976 book, Warning to the West, he tells us that–

“…there also exists another alliance – at first glance a strange one, a surprising one – but if you think about it, in fact, one which is well-grounded and easy to understand…. [This] is the alliance between our Communist leaders and your capitalists.”

“This alliance is not new. The very famous Armand Hammer, who is flourishing here today, laid the basis for this when he made the first exploratory trip into Russia, still in Lenin’s time, in the very first years of the Revolution. He was extremely successful in this intelligence mission and since that time for all these 50 years, we observe continuous and steady support by the businessmen of the West of the Soviet Communist leaders.

“[Russia’s] clumsy and awkward economy, which could never overcome its own difficulties by itself, is continually getting material and technological assistance. The major construction projects in the initial five-year plan were built exclusively with American technology and materials. And if today the Soviet Union has powerful military and police forces – in a country which is by contemporary standards poor — they are used to crush our movement for freedom in the Soviet Union….

“Certain of your businessmen, on their own initiative, established an exhibition of criminological technology in Moscow. This was the most recent and elaborate technology, which here, in your country, is used to catch criminals, to bug them, to spy on them, to photograph them, to tail them, to identify criminals. This was taken to Moscow to an exhibition in order that the Soviet KGB agents could study it, as if not understanding what sort of criminals [political resisters]… would be hunted by the KGB….

“Lenin foretold this whole process. Lenin, who spent most of his life in the West and not in Russia, who knew the West much better than Russia, always wrote and said that the western capitalists would do anything to strengthen the economy of the USSR….

“Nikita Khrushchev came here and said, ‘We will bury you!’ They didn’t believe that, either. They took it as a joke. Now, of course, they have become more clever in our country. Now they don’t say ‘we are going to bury you’ anymore, now they say ‘detente.'” Nothing has changed[16] in Communist ideology.”

But everything has been changing in America!

Why? What can we do?

A key part of this planned transformation is Islamic terrorism, which has been fueled, funded and used by Russia. As in George Orwell’s 1984, there are three main forces used to destabilize the world and create the dissatisfaction needed for planned control in a “single world culture.”  [More on this topic]

Solzhenitsyn shows us the basic problem: rejection of Biblical Truth and values. “It is almost a joke now in the western world,” he reminds us, “to use words like ‘good’ and ‘evil.’ They have become almost old-fashioned concepts, but they are very real…. These are concepts from a sphere which is higher than us.”[17]

Indeed they are! “Woe to those who call evil good and good evil,” warned Old Testament prophet Isaiah (5:20). ‘Abhor what is evil. Cling to what is good,” wrote the apostle Paul. (Romans 12:9) Yet Biblical views of good and evil are fast disappearing from the American consciousness. They seem too intolerant and divisive in today’s permissive, postmodern culture…”   read more here 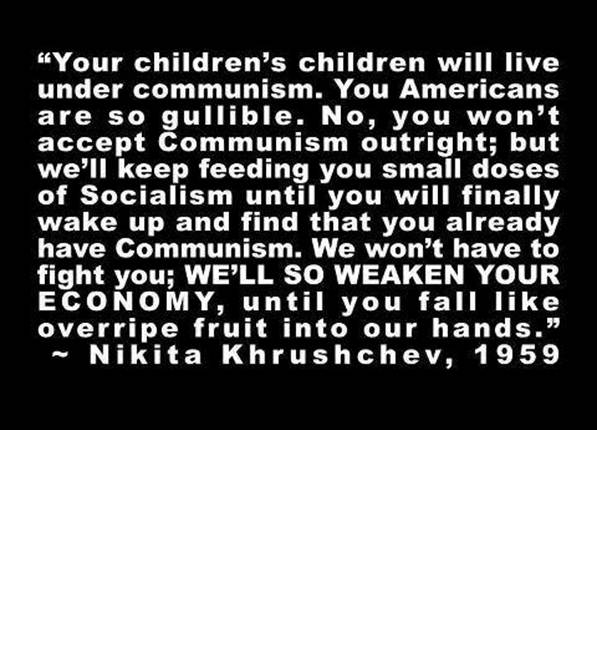 A Decline in Courage...

If ‘Assault Weapons’ Are Bad…Why Does D...
Bookmark the permalink.