Property Rights Councils: Adding a Stakeholder to the Soviet Brew

Property Rights Councils: Adding a Stakeholder to a Soviet Brew  by Michael Shaw

“Recently, several have called for the municipal creation of Property Rights Councils (PRC). The argument is that government officials need input for this “special interest.” Paul Coble of Wake County, North Carolina argued for the establishment of a property right council there because he says, “I cannot rely on the Commissioners being prepared or equipped with constitutional knowledge.”

You mean to say that people are elected to office not understanding their oaths of office to the Constitution! Who is voting for these people? Perhaps that is where the problem lies. Benjamin Franklin told us in 1787: “You have a republic if you can keep it.” We have not kept it. Children are not taught that America is a republic. Most adults think America is a democracy.

The American republic is the only nation in history where natural law prevails and civil law is subordinate. The American republic is the only nation ever founded on the idea that individual man has a natural right to live a life of his own. Accordingly, every person possesses unalienable rights including the right to life, liberty and the use and enjoyment of their private property. Under the American republican form of government, emulated by all state constitutions, the scope of government is intended to be very limited so to conform to the ideal set out by our founders.

A property rights council does not exist in the operation of the American republic. The creation of such boards means the fall of the republic. As a youth I learned that “councils” were soviets. So that begs the question: What is a Soviet? Soviets operate to achieve predetermined solutions that are made behind the scenes. If 100 communities created property right councils we would have substantially more than 100 definitions of what private property is.

By succumbing to a localized soviet system of government, property right advocates lose the war before they effectively start the battle. The threat Americans face is rule by a central force guiding the global to local movement. What is needed is a vetting of local government operations and politicians, not an expansion of a soviet system in a desperate attempt to recapture property, liberty or America. The change will come when normal people run for the school board or water board or city council, not those controlled by special interests. The goals include getting ICLEI out of town and out of state, undoing local government’s involvement with the federal Councils of Governments (COGs) and Metropolitan Planning Organizations (MPOs), and defrocking the Non-Government Organizations (NGOs) influence downtown. The time has come for Americans to do the right thing!…” 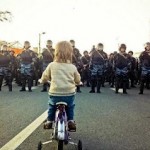 This land is my land! Well in name only...

Solzhenitsyn's Warning to the "Free" World
Bookmark the permalink.